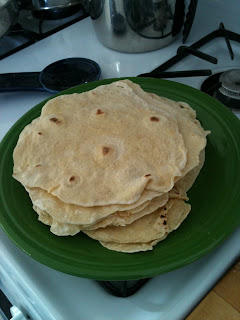 To anyone who's ever made tortillas from scratch: Why didn't you say it was so easy AND rewarding? I cannot believe how delicious they are! I swear I only ate one while they were cooling off.
Why: Well, wouldn't you know it Trader Joe's discontinued their spelt tortillas. I spit fire half the way home until I stopped being so stinking mad for a moment and the light bulb went off. Actually it felt more like a bell dinged inside my head or a rock hit the side of my head. And so it happened, "Ding, Bonk I'll make them myself!"
Mods: Spelt flour instead of regular, shortening instead of lard, and I only made a half batch to test the waters.
How: I found this recipe on Allrecipes, my go-to recipe resource. First-time recipes cooking from scratch are more like projects than cooking. Search out the target, look for tips online (maybe), let the recipe and directions mull for a while - hours, days, weeks, whatever it takes for me to get up and tackle it head on. When I hang the recipe up on the fridge I'm like a shark circling its prey, honing in on the target. Pass by glance, pass by read a step, pass by envision creating it, leave it alone for a while....peek. Eventually I jump in and go for it. This project took about 24 hours until I started yet I still felt I was jumping in early. My plans for a Sunday lunch of bean burritos got the better of me. So I wasn't really on my game while cooking.
The dough part was easy, mostly. I wasn't completely sure of myself when mixing the shortening in with my fingers until a cornmeal consistency. Is that cornmeal? Now is it cornmeal? No, I think I feel globules of shortening. I had to tell myself to keep going despite thinking it was good enough. Note: This could be key next time. Keep it in mind.
On to the dough manipulation. All of the dough gets kneaded somewhat on a floured surface. Not difficult but a little sticky so I kept adding flour to the surface until it was just tacky. The dough was then separated out into 12 as-uniform-as-possible balls. You might want to put them on a floured surface as well. They tended to stick a bit after a while. Or maybe it was the three year old poking, squishing, and rearranging. The tricky and initially frustrating part was rolling out the balls.
I stored them all in a large zippered baggie after cooled. They seem to re-heat well with a damp paper towel in the microwave to add moisture.
Next Time: I will definitely be making this again and again. I'd like to do something a little different with shaping the darn things and once I get that figured out I'll step it up to a full batch. How about a tortilla press? I saw the ladies at the taco shop using one for their corn tortillas (I was mesmerized by their process) and they covered each of the flat metal plates with plastic bags. Brilliant! (Probably health code but that works for me!)
Posted by Ursula at 7:14 PM

A Pinch of This & A Snip of That